Posted on August 8, 2018 by Community & Urban Sociology Leave a comment

Last time ASA was held in Philadelphia was 2005, the same year I graduated high school. A staple in urban sociology, Philly has undergone many significant changes since then. Being raised in West Philly, my younger years were quite different than that of the Fresh Prince. My childhood functioned somewhat between W.E.B. DuBois’ (1899) Philadelphia Negro and William Julius Wilson’s (1987) The Truly Disadvantaged. In a state of double consciousness, I constantly wondered (at least on a surface) why my neighborhood was the way it was. Countless other works within our field have helped me make sense of different aspects of my childhood. Why was my family adamant about sending me to Catholic school (even though they were not at all Catholic)? Why did I have to take 3 forms of transportation to get to high school while my peers drove in new cars and trucks? What happen to all of the public housing that stood tall in many of the Black neighborhoods? How did I make it out and why are others still in the same place? And better yet, why does “making it out” mean living in white spaces? As a late comer to sociology, the joys and perils of understanding these dynamics within community and urban sociology have largely shaped my reflection on the city of Brotherly Love – a place I still call home. 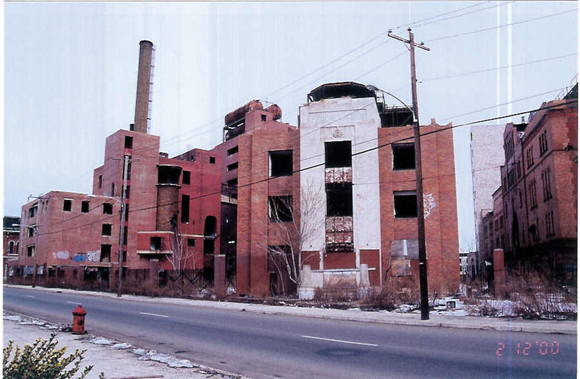 Many of the changes in Philly have been linked to its changing institutional landscape. Anchor institutions, mostly comprised of universities and hospitals, have largely redeveloped their surrounding areas leading to issues of gentrification and contestations of public and private space. As Carolyn Adams (2014) notes, the reshaping of Philly has largely come about from non-governmental, non-market institutions. Universities such as the University of Pennsylvania, Temple University and Drexel University have made neighborhoods in West and North Philly much more attractive to outside investment. With the shared boundaries of West Philly, UPenn and Drexel have driven much of the change in neighborhoods such as University City and Mantua. This has not just been by attracting students to the area. Programs such as Penn’s Home Ownership Services provide resources for employees to buy homes in West Philly (UPenn 2018). Temple has a similar program that provides forgivable loans toward the purchase of a home in selected zip codes (Temple 2017). And while the physical footprint of these institutions might be smaller, the impact it has on branding and redeveloping surrounding neighborhoods is seen in rising housing costs and development, along with changing demographics in former industrial neighborhoods. Evidence can be seen in various parts of the city. Just 10-minute ride northeast of the Convention Center, you can find Northern Liberties – a basking example of creative class development. 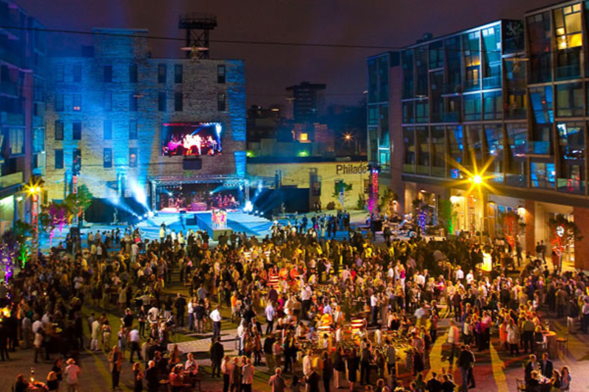 Inside The Schmidt’s Commons, photo courtesy of Apartment Finder.

Northern Liberties has drastically changed from the host of the Jack Frost sugar refinery and the Ortlieb’s and Schmidt’s breweries in the 1980s. It now hosts The Schmidt’s Commons, formerly known as The Piazza at Schmidt’s – a plaza that hosts concert events, silent parties and other events with several restaurants and boutiques along 2nd Street. The plaza, owned by Donald Trump’s son-in-law, Jared Kushner has said to be struggling. The development couldn’t find the right mix of entertainment as hosting concerts annoyed residents within the 500-unit luxury and nixing the events made it dull and boring (Lurye 2016). 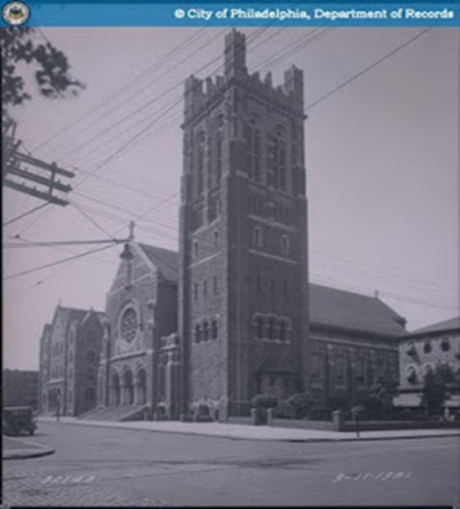 Picture of Our Lady of Victory Parish, photo courtesy of Philly Church Project.

Investment in areas like Northern Liberties came at the expense of other neighborhoods in the city. While the city devoted time to making areas attractive and cool to the creative class alongside the expansion of its anchor institutions, historic communities of color suffered from disinvestment and a breakdown in social order. I remember first noticing these changes when my elementary school, Our Lady of Victory closed its doors in 2006 after being consolidated with Our Lady of the Rosary parish.

After the church was sold off, Victory’s parishioners joined the members of Rosary, and the church was renamed Our Lady of the Blessed Sacrament. National discourse surrounding child abuse and molestation claims hit Philly hard as many of the parishes that provided educational opportunities to low and moderate-income families of color were closed. During this same period, there was a proliferation of charter schools and non-denominational churches that overtook the immaculate Catholic buildings that defined neighborhoods. When the doors closed at the church, many did not follow the parish to its new location. For many, this signaled a breakdown of institutions in longstanding communities. People do not just believe in the teachings of the institutions, but in the institutions themselves. We believed they would always be there, not as a point of salvation, but as a point of reference and stability. 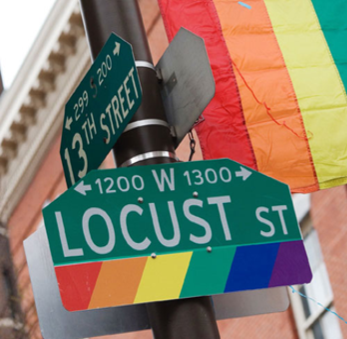 Rainbow Signs of Gayborhood at the corner of 13th and Locust Sts., photo courtesy of GO Magazine.

A few blocks south of the Convention Center, you can find Gayborhood. As Blumgart (2016) suggests, the name of this LGBT-oriented community reflected the blunt nature of Philly natives. During his tenure, former Mayor John F. Street installed rainbow street signs throughout the community in 2007 (Bolcer 2007).

Dating back to the mid-20th century up until the early 2000s, Gayborhood was more of a red light district where drugs and sex were sold on corners and in the alley ways of the old grid design of the city. Philly was the second city outside of Chicago to official mark its LGBT neighborhood with official public symbols. Historically known as a “gay ghetto” (Blumgart 2016), Gayborhood is an iconic place booming with activity denoting many aspects of urban life: boutiques, gay bars, highly rated restaurants,

and your occasional sex shop. Nevertheless, the acceptance of this neighborhood by the local political establishment has largely reshaped the ways in which public officials discuss issues across the lines of race, class, gender and sexuality, and their intersections.

In the same framing of the neighborhood, I also remember the changing definition of the word “gay” among my peers. Growing up in a Black, heteronormative neighborhood, incensed with depictions of individuals from the LGBTQIA+ community as “the other”, boys were teased and ostracized for not fitting traditional, heteronormative modes of masculinity. Jokes in and out of school stretched the gamete of subtle microaggressions to full blown indoctrination of their very existence as sinful. Homophobia, hypermasculinity and institutional biases created an environment for oppressive acts. Moreover, the concept of the Black family has been exploited since the 1965 Moynihan report (Gans 2011). While the stigma of the LGBTQIA+ community has not been erased, it has surely changed alongside the changing demographics of the city. The convergence of issues around race and sexuality further complicate stories of city planning and urban development.

Outside of center, the projects were home to many of the city’s urban, black poor. Philly has the fourth largest housing authority in the country. Currently serving more than 14,000 affordable housing units, it serves approximately 80,000 residents (PHA 2018a). Established in 1937, it is Pennsylvania’s largest landlord with a total budget of approximately $400 million (PHA 2018a). It manages many programs including traditional public housing, vouchers and scattered site properties. The old, tall buildings of public housing are but a memory now. In 2016, PHA demolished The Norman Blumberg Apartments – one of the city’s most notorious housing projects. Originally built in 1967, Blumberg Projects were the “modern” solution for dealing with inner-city poverty. Shortly after their emergence, they became the antithesis of everything wrong with public housing: misguided urban planning, concentrated poverty and governmental neglect (Whelan 2016).

Since then, the site has become home to PHA’s first Rental Assistance Demonstration (RAD) program project. The new Sharswood/Blumberg Transformation Plan has 10 phases to create 1,200 units including a mix of affordable and market-rate, rental and homeownership units over the span of 5 to 7 years (PHA, 2018b). This plan for neighborhood transformation is emblematic of processes across the city and other urban areas throughout the world. It reflects the classic question of whose right(s) to what city? (Harvey 2003).

My deep interest in housing policy has always centered around this question. Yet, it wasn’t just an intellectual endeavor of mine. It was much more personal. After graduating from Penn State in 2009, I returned to Philly and stayed in the lower level of my father’s duplex in Southwest Philly. The unit wasn’t in the best shape but it allowed me to live on my own while I attended grad school and worked full-time. After a few weeks, I quickly found out that my dad was paying what seemed to be a very high interest rate. After some digging, I realized my dad, like many other Americans, especially those within poor, communities of color, had been a victim of predatory lending facing foreclosure (Squires and Hyra 2010). The teaser subprime rate of his mortgage had lapsed and now he was paying close to double the initial amount in his mortgage payment. While I looked into this, I also noticed that down the street from the duplex, there was a public housing site, named Paschall Apartments, that had been fenced off. Having driven by the site everyday on my way back and forth to grad school at West Chester University, I wondered where all of the people went. What was to become of this site and how did this change in housing further change the neighborhood? The site was transformed into the new Paschall Village, an award winning, green development site, which opened in 2011.

However, the former question of where did all the people go is still unanswered. In Philly, there is still an enduring legacy of exploitation of communities of color at the expense of urban growth and development. Longstanding residents, like many other urban areas, have to deal with either being homeowners of century old housing in need of extensive repairs or renters in precarious living situations. With regional development efforts being seen not only in Philly, but neighboring places like Camden, NJ, housing issues will surely continue to rise.

I owe everything to the city of Brotherly Love. Not only has it made me resilient in societies’ overlapping systems of oppression, it has given me further insight into the beauty and ugliness of urban life. My story of Philadelphia mirrors many of the writings of other cities that have dominated urban scholarship including Chicago, Baltimore, and New York. However, now living in Colorado, I have grown to understand that urbanism takes upon many narratives and histories. The classic Black-White divide of the east coast cities does not fully explain the political, social and economic journey of Hispanics within the Denver metro area. Furthermore, the story of demolition and urban renewal policies take upon a different form in places that have little stock of traditional public housing. As McCabe (2016) suggests, the conflict between homeowners and renters is even more evident in places where there is little housing assistance.

Even more importantly, growing up in Philly has made me question and re-question my own positionality. How does my being in academia actually challenge dominant narratives of poverty, housing and race? Does teaching at a wealthy, small, private liberal arts college actually provide a voice for marginalized communities of color? Does my research shift the future actions of scholars, planners, activists and policymakers? In this time at the conference, I hope my colleagues reflect on similar notions so that community and urban sociology may continue to highlight and provide solutions to the nuances of urban life.

Adams, Carolyn. 2014. From the Outside In: Suburban Elites, Third-Sector Organizations, and the Reshaping of Philadelphia. Ithaca, NY: Cornell University Press.